I have long read about Tobago’s reputation for great diving in my Sport Diver magazine, and this was really the main draw for me.  I wanted a lazy beach vacation, but I wanted to dive…and I wanted to go somewhere new.  Tobago fit the bill.  Just north of Venezuela, in the southeastern portion of the Caribbean Sea, Tobago is situated at the merging of the Caribbean Sea with the Atlantic Ocean.  What results is a very nutrient rich environment and a diverse array of dive sites.  Tobago is also kind of a well kept secret, keeping the crowds down, thus the reefs vibrant and healthy.  You can dive out of Crown Point at the southern point of the island or out of Speyside or Charlotteville in the northern reaches.  The diving is good everywhere, but it is particularly spectacular up-island (in the north).  I dove for six days and barely scratched the surface.  I would love to return for a week sometime to get in more diving, particularly in the northern reaches.  Due to the rain, we mostly kept close to Charlotteville in Man O’ War Bay, leaving St. Giles Island, Speyside, and several other sites unseen. 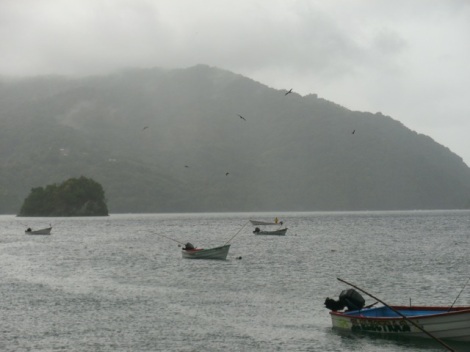 Leaving the dock in Charlotteville, looking to the west.

With all the rain, the visibility was not awesome, but the reefs were still so intensely colorful and alive, teeming with  sea life.  On every dive, I was overwhelmed with the insane numbers of fish swimming about, schools of tuna among others.  My camera and I were on the outs, so many of these shots were taken by Caroline of Charlotteville Adventure Dive Center (CADC). 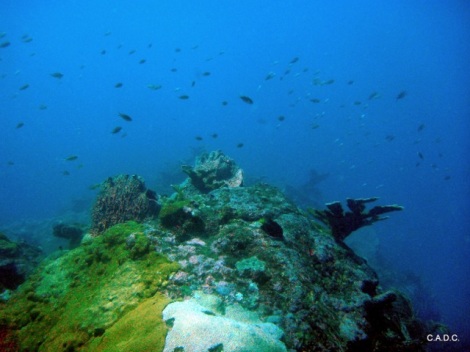 My first few days in Tobago were spent diving with Undersea Tobago out of Crown Point.  We dove the Atlantic side, where the dives were very nice gentle drift dives.  Notably, we saw an enormous stingray (as well as many smaller ones)…and when I say enormous, I kind of mean it.  The head of this thing was as wide as my arm span, if not bigger.  We also saw a HUGE lobster, who was also NOT shy.  He (or she) climbed up on a rock to pose for us!  It was great!  Bummer was that I hadn’t brought my camera that day as I was hesitant about my first day back in the saddle.  We also dove the Maverick Wreck and Mt. Irvine Wall on the Caribbean side.

Loved this white corals dotting the reefs down in this part of the island. 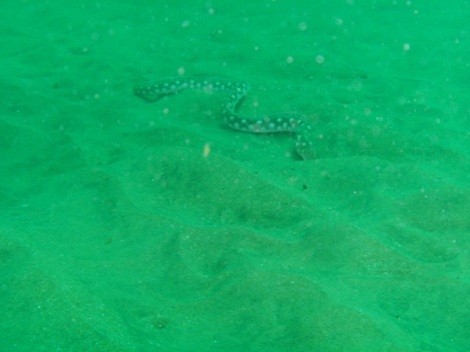 This sea snake swam past, and it was so cool to watch it dig it’s head into the sand to find food!

The Maverick Wreck is one of the more well known dives here in Tobago.  The M/V Maverick was the first passenger ferry between Trinidad and Tobago, and it was sunk intentionally to create a dive site.  It sits at 100 feet and is intact and safe for divers.  The visibility was low but the schools of baitfish that swam in and around the wreck made for a really cool atmosphere.

The schools of bait fish…they were everywhere!

Up in Charlotteville, Caroline and I dove several sites around the bay, including Big Rock, Breakfast Cove, Iguana Bay, Coconut Cove, and Landslide.  What struck me the most about these sites were the crazy vibrant and healthy corals and the insane number of schools of fish.  We saw plenty of trumpetfish, drummer fish, angel fish, and other really cool fish.  But, the schools….they were so beautiful. 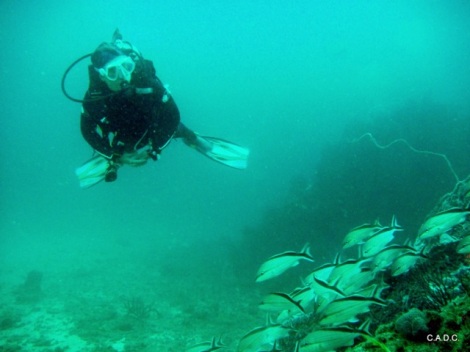 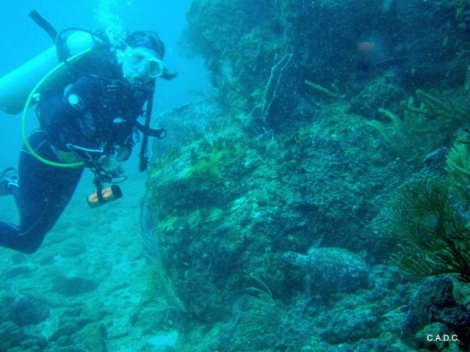 And a few stingray!

Coconut Cove might have been my favorite of these sites, as in one part of the cove, you looked out and saw a field of large brain corals of varying colors.  One word…Wow!  (I couldn’t find a photo that captured this field of brain coral, but we got plenty of the reef!)

Caroline and Dash made a real point to get me out to London Bridge, and I am so glad they did.  This site was very cool! 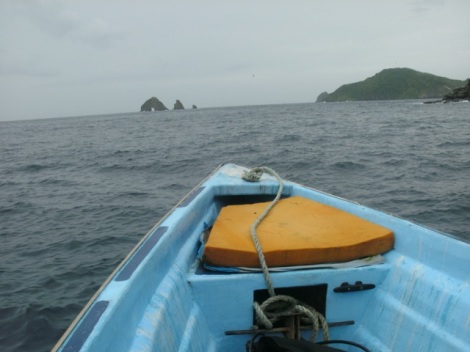 London Bridge is amongst the St. Giles Island.  It is a large rock with an arch that, when conditions are right, you can swim through.  But, you have to work the currents, holding onto the rocks when the current is against you, and swimming like mad when it is helping you.  There is a pattern to the current that goes through the arch, and you quickly learn how to work with it if you want to do the swim through.

I look a bit frightened…or surprised! Maybe I’m gearing up to swim through the arch!

It wasn’t nearly as hard as I expected, and it was super cool feature of a dive that is spectacular aside from the arch.  Huge boulders are strewn throughout the area, covered in coral.  Big sponges just out from rocky surfaces.  It’s really a fun dive!

Which dive shops did I use?

Undersea Tobago, located in the Coco Reef Resort.  I only dove with Undersea Tobago for a few days, as I decided to dive a few days from the north end of the island to see the variety of diving the island had to offer.  However, I really enjoyed diving with Undersea Tobago.  The dive masters, Ellis, Kelly, and Andrew were very friendly and attentive.  I only met the owner Derek briefly, but he seemed crazy professional as well.  I found that they take great care of the gear and try to make the experience as positive for their guests as possible.  They are also just delightful personalities, which makes diving with them even more enjoyable.  I do believe that they will organize trips up to the northern parts of the island for special (ie larger) rates, but I never asked about this option.

Coco Reef from the stretch of sand just past Swallows Beach.

Charlottesville Adventure Dive Center, located just to the southwest of Charlotteville on the road to Cambleton.  Caroline, the owner, is the dive master, instructor, owner, all in one.  She has 2 employees, one to help her in the shop and the other is her captain.  She is very attentive and is very safety oriented.  I really appreciated all the time she took to make sure I was well equipped with any essential safety gear that I might need.  This preparation came in handy when we dove London Bridge, because upon entry, I quickly got taken by the current (my own fault, as I didn’t realize that I needed to swim to the rock as I was descending instead of after).  Anyways, I followed all the protocols she had laid out about what to do if we got split up, and things moved forward smoothly…and I kept calm and collected the entire time.  Dash, the captain, had been watching my bubbles, and I’d been watching the bottom of his boat.  And, I was back up in no time, reunited with Caroline and ready to try again…this time we were successful!  Because it was just the 2 of us on 2 of our dive days, she really tailored the dives to my needs and wishes.  I think she would have done this anyway, as she only takes out very small groups.  But, it still kept it pretty awesome.  We had a great time! 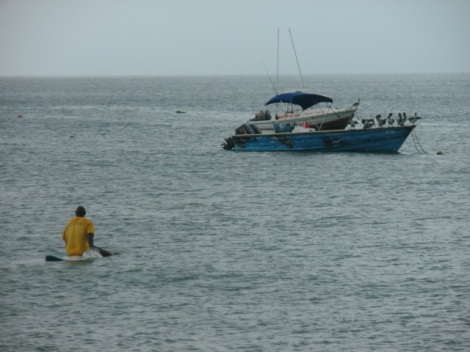 Dash going out to get the boat…in the rain. Maybe he just didn’t want to get wet! 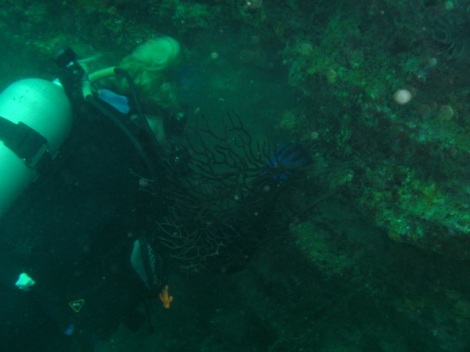 Caroline determined to kill that lion fish…with a rock! Girl has gotta get a harpoon!

Dash trying to start a dance party on the boat! We had a great time in and out of the water.

Me hanging out after a dive. London Bridge in the background.