Juneau has so much on offer when it comes to active ways to spend your days.  One of the things my wonderful hosts (Ruth & Allan through AirBNB) had recommended was a kayaking trip with Above & Beyond Alaska.  Based on my next to nill experience in a kayak, I chose the guided half-day tour of the Tongass Coast of the Inside Passage.  The location and route vary.  However, this particular day, we dropped in at Amalga Harbor and kayaked along the coast to Boy Scout Beach. 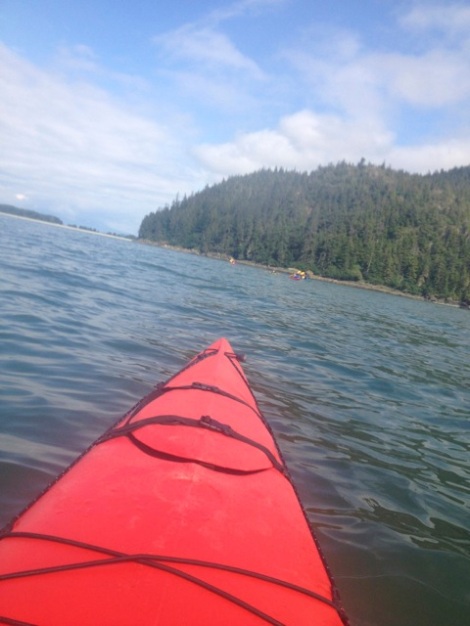 We had a small group of 10 plus 2 guides.  The 10 of us were paired up into 2-person kayaks, and the guides paddled along in singles.  Our group was a great group.  A mother and pre-teenaged son from Northern California were along as a break to the cruise ship activities that seemed to be draining the mother of her soul (Disney cruise, mind you).  A family of 4 from Vancouver (or was it Colorado…hmmm) was hanging out with us, and they were, maybe, the calmest of the group.  There was a mother and daughter from New York, who playfully squabbled and laughed the entire time.  The daughter was delightful and friendly, but she never seemed to pay a moment’s attention to any direction from her mother…which amazingly, her mother took in stride laughing instead of getting upset.  Thankfully, she remembered her teenage years!  And, I was paired with their friend, a woman who had moved to Juneau from the East Coast several years back, and who was great at steering that kayak.  Lucky me!

We paddled out along the shore, with partly cloudy skies and a decent amount of sun for the first half of our trip.  Almost immediately, we began to see salmon jumping out of the water…so high, it was insane!  We were kayaking near a hatchery, so there were so many in the area.  Every few moments, another one would jump somewhere in our vicinity.  It never ceased to amaze me how these suckers jumped, almost like they were flying.  Then, as we rounded a rocky, craggly area of coast, we started to spot bald eagles perched in the trees. 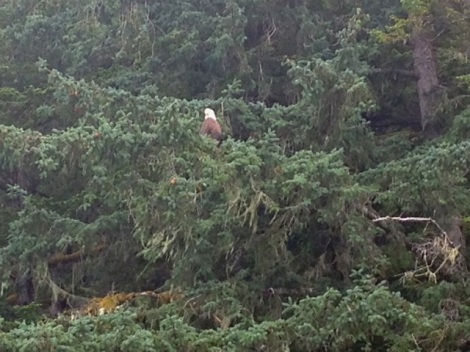 We probably saw 4 or 5 of these eagles in really close range.  I thought I would bore my kayak mate with my oh and ahs, but she also seemed to take delight in watching them, telling me that she never grew tired of seeing these majestic creatures.  We then headed towards a beach jutting out from the coast, which required us to turn our kayaks in a new direction.  You would think that this is not an important detail, but in simply changing the direction of the kayak, your whole view of the area changes.  When you are kayaking, you don’t look around or behind you too much for fear of losing balance in the kayak and tipping it.  So, when we turned towards the beach and the mountains across the passage became the backdrop of the beautifully tranquil waters and the bright white beach, I was in awe.  It had become cloudy and cool but was still insanely beautiful. 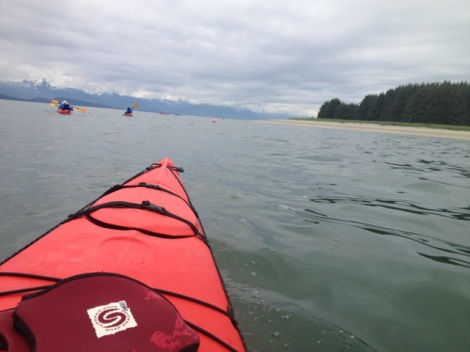 The beach was our snack stop.  We got out, stretching our legs and sprawling out on the sand for a bit of water and a snack of treats packed for each of us by our guides.  I took this time to bond a little with the mother from the cruise ship, as she seemed to be craving a little adult interaction.  We got along quite well, and she seemed to be having a good time reminiscing on the days when she was also a young, independent traveler. 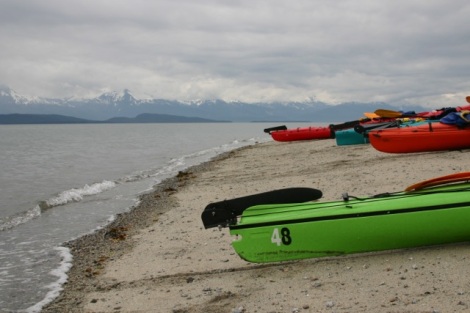 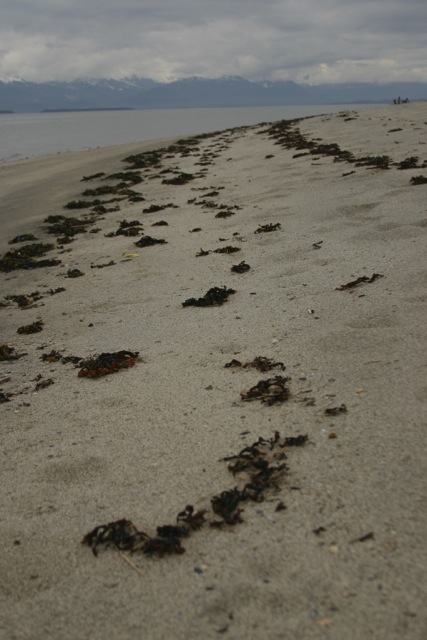 After a break that seemed to go by too fast (but I’m sure was a solid amount of time), we got back in our kayaks and paddled back, stopping at the Peterson Creek Salt Chuck on the way back to watch the salmon.  I’m not going to lie, I didn’t see any salmon jumping up the falls…but we were the last kayak to pull up, so the commotion may have driven them to calm down.  I didn’t really care.  I had had a great time with delightful company and a morning of paddling about in the midst of spectacular scenery, watching salmon jump and bald eagles soar.

One response to “Kayaking in the Tongass Coast, Alaska”