My father has always loved to travel, but he doesn’t get to do it much.  He and I have vacationed together a hand full of times, and we make a pretty good team.  While I tend to look for any opportunity to turn my brain off, he continues with his never ending curiosity.  It makes for a good balance.  We both like to explore, take a lot of photos, and don’t take it too hard when things don’t go right.  We do bicker, mostly about small things like why he’s so frustrated about the silverware that’s missing from the take-out bag or how I can’t have a conversation when I’m tired.  But, we both approach travel pretty similarly, and we have fun.  This summer seemed like as good of time as any to get him back on the road, and so the time had come.  Why Alaska?  Who knows.  I got an urge.  I knew he’d love it.  And, we have family up in Fairbanks that we hadn’t seen in years.  So, Alaska it was.  10 days in total.  Route = Fairbanks to Anchorage to Homer with stops at Denali N.P. and Girdwood.  A bit of sensory overload and an action packed itinerary, but lots of beautiful scenery and little adventures along the way.  Between he and I (and my cousin’s) cameras, we collected a ton of beautiful photos.  There is no reasonable way that I could ever share them all.  But, I wanted to share some highlights.  And, hopefully, more will come with future posts on Homer and the Delta.

The trip started a bit rocky.  There were insane storms in Minneapolis just a few hours before our flight to Fairbanks, and Pops was flying in from Ohio.  So, of course, his connection was late.  And, no one on his flight told him that our next flight was also delayed.  So, he ran to our gate to find us sitting there waiting.  Frustration #1 –  check.  All the airport food joints were closed…and he had not eaten.  Frustration #2 – check.  Our plane was unexpectedly under-booked, leaving us rejoicing in all the spare seats to sprawl across…but within an hour, we were all freezing.  7 hours of freezing.  Frustration #3 – check.  Ha!  It can only get better from here, right?  Well, it did.  We were met at the airport by the remnants of sun (at like 1am!!)…and my cousin Todd, his wife Karen and their three children Sierra, Skyler, and Zach.  Lots of hugs passed around, even though the kids were a little weary of us smelly frozen strangers standing in front of them expecting hugs.  Still hungry, despite the airplane snacks, we got toted to the northern most Dennys Restaurant…or was it a Perkins?  I don’t remember.  It was weird eating breakfast at 2 in the morning next to signs warning drunk people to keep it in check or get booted…while it’s still light outside.  But, it was awesome to see my family for the first time in years.  We crashed for some hours, then got up to head out to do some sight seeing.  I felt relieved to hear that they never do any of the sight seeing around and that they were excited to do it themselves.  Day 1 – Riverboat Discovery.  A few hours spent on a riverboat cruising the river (I think the Chena) with stops to see a bush pilot demonstration, to learn about dog mushing at the Susan Butcher Kennels, and to explore a demonstration Athabascan Indian village to learn about the native populations and their culture.  It was definitely touristy, but it was a really nice way to see Fairbanks, learn about it’s culture, and spend some time with family.  What better way to do that than on a riverboat. 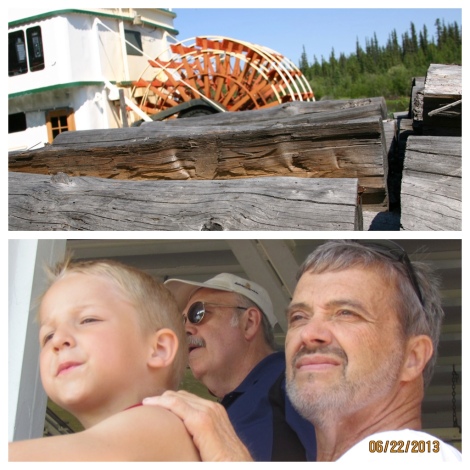 Todd and Zach attentively watching the bush pilot demonstration. Then, below, you see the two that don’t like to smile for the camera! Skyler and Sierra. 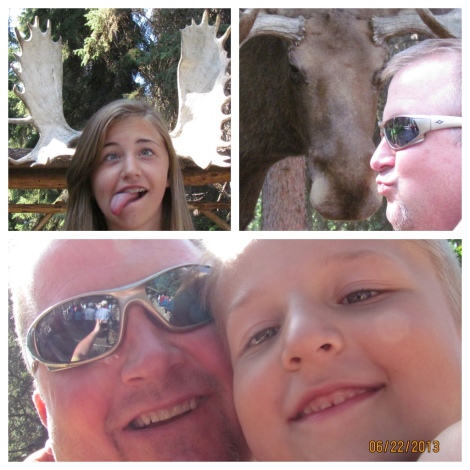 Goofing off at the Athabascan Indian village. 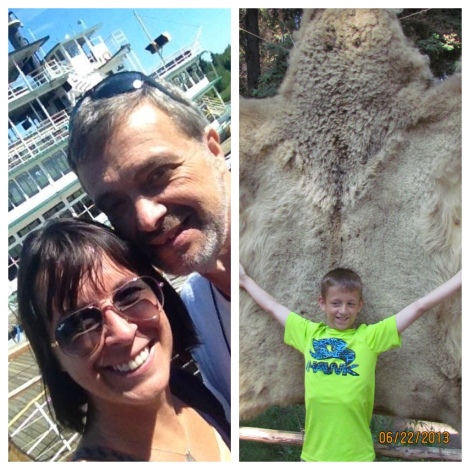 Pops and I outside the riverboat. Skyler dwarfed by the bear skin.

Then, we slept…a lot.  No, wait, some of us cooked and ate dinner…then we all slept…for hours.

Day 2 – The Delta.  Karen’s family has some land a few hours outside of Fairbanks in a place called Delta Junction.  They gather by the lake and kayak, canoe, fish, BBQ, and just generally hang out.  So, that’s what we did.  Another amazing day hanging out with these wonderful people.  Too many great photos to share.  It took so much brain power to narrow it down to these.

Moose sightings by the highway. Kids were in the water before the ignition’s could be turned off.

Too many characters in one place!  This little girl should have her own talk show. 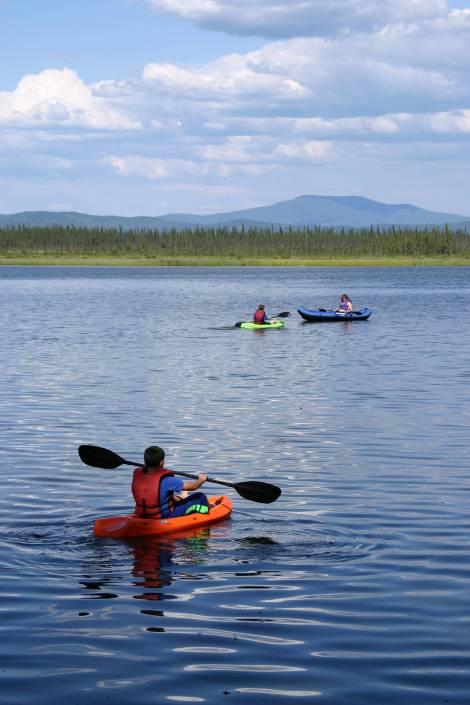 …some prefer to lay back and be toted about in a motorboat. 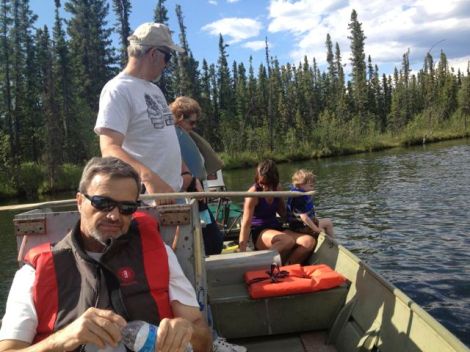 Exploring the rivers and watching the glacial water mix with the clear non-glacial water, looking for moose…and eagles. 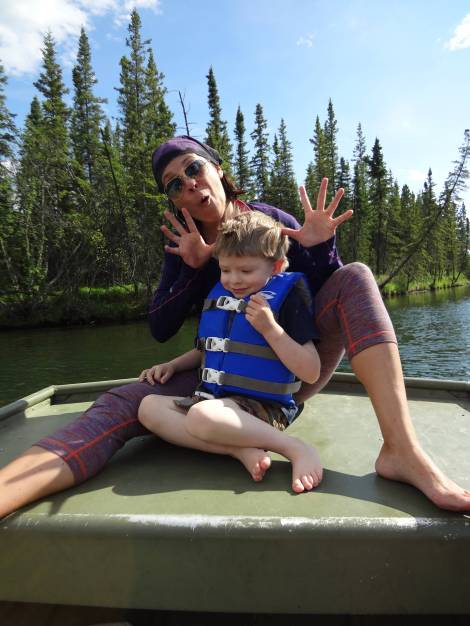 Doing yoga. I’ll find a place anywhere to get into a sun salutation.

This man loves to fish…any chance he gets. 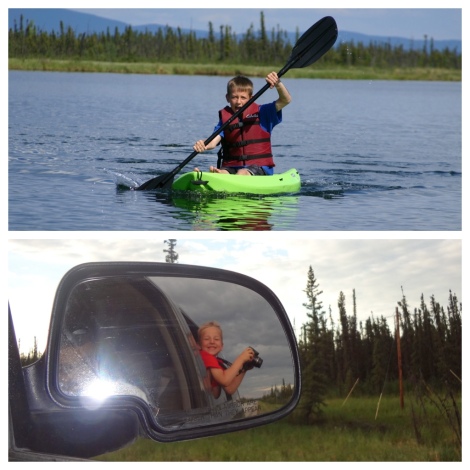 Watching the sun set at 10 o’clock at night.

Day 3 – My birthday!  Pops and I headed out on another road trip, this time to Denali National Park, where we hopped on a plane to Glacier Ruth with lots of sight-seeing en route.  Hey, guess what.  The birthday girl gets co-pilot!  Another post to come with more photos of the little birthday party on the glacier.  But, here’s the teaser.

O-H….I-O. Works anywhere. And the echo doesn’t hurt either. 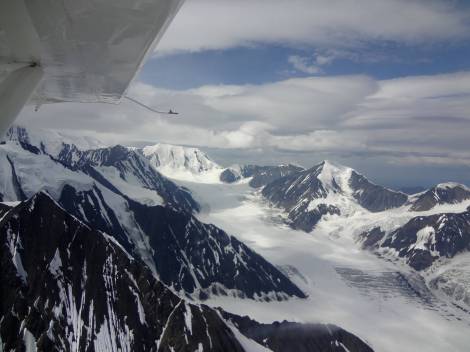 The views of Denali N.P. were incredible. I’m pretty sure this one was taken by my father.

After our flight, we stopped at the Great Alaska Fish and Chip Company for a delicious salmon sandwich before a little touring by car of Denali N.P. (photos are lacking due to the overwhelming nature of the mosquitos out at dusk that day).  Then, we headed back to Fairbanks…I’m pretty sure we were exhausted and not much else happened that night! 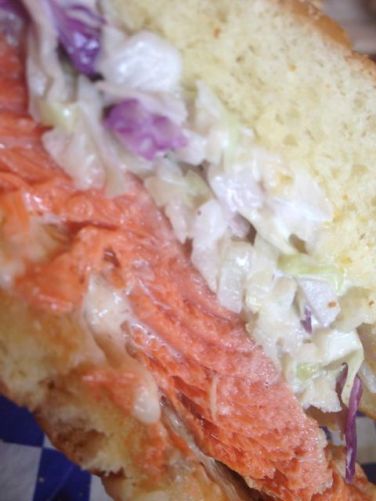 Check out that deliciousness. Don’t act like you can’t tell how tasty that was. Alaska Fish & Chips seems like just another fried food joint until you walk in and see a tasty looking menu and realize that they source their food from Alaska, making them fairly unique for the park area.

Day 4 – Gold Dredge #8.  A trolley ride with educational demonstrations on how gold is and was mined, followed by hands on gold mining fun…for them.  I’m too impatient for this madness!  Fairbanks really was gold mining country.  Supposedly, there is still a ton of gold still in the soils up here.  While I always struggle with these types of tours, it really was interesting to get an introduction to this part of Alaska’s history and culture. 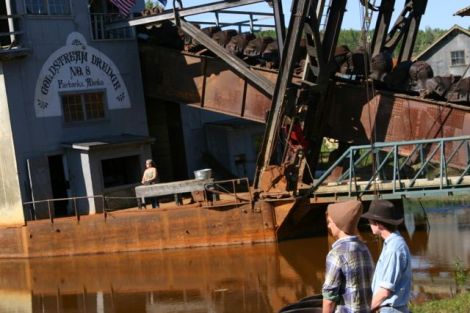 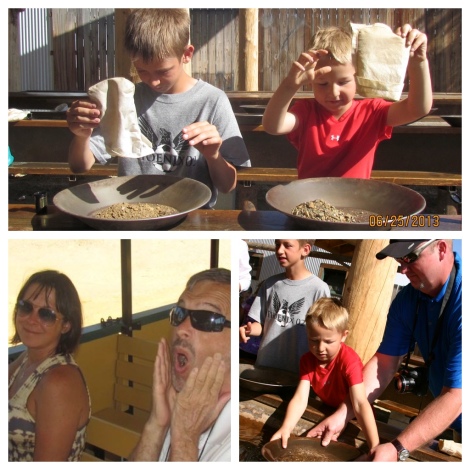 We followed that up with some chowder at the Chowder House.  Then, Zach and I did yoga….aka, I did yoga, and Zach played video games stopping intermittently when something peaked his interest and he wanted to try it out!  Either way, it was fun bonding time, and I got him to do a little acro shoulder stand too!  Then, we were off to Skyler’s soccer game…and yes, it was 100 degrees.  Fairbanks, Alaska is hot in the summer…hot and dry.  Your skin will turn to gator.  Your nose will fill with boogers.  And, the mosquitoes will pester the hell out of you.  I’ve never played avoid the mosquitoes so intensely as I did here.  You don’t leave home without your Off! 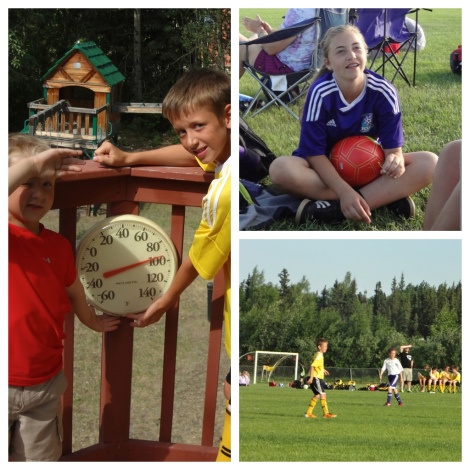 Soccer in the heat.  This kid’s great!

Sideline shenanigans. Zach and I trying to show off his new moves…shoulder stand didn’t work so well this time around!

Ah, fun times.  So nice to catch up with these wonderful people.  We were so sad to go.  But, we had more adventures awaiting.

3 responses to “Adventures in Alaska with my Pops, Pt. 1”