Fun shot from outside of MINSA’s office. Esteli is definitely a motorbike kinda town.

There are some places that make me say, and genuinely feel, “I just love Central America.”  Often they are beach spots or beautiful colonial towns.  Not that often are they just regular cities, without the beautiful buildings, but with plenty of polvo, grit, and hustle.  But, frequently, in Estelí, I felt just that, “I just love Central America.”  When I set out for Estelí, I had no idea what to expect.  I was meeting a close friend in order to work with a yearly medical and dental brigade, which partners very closely with a foundation in Estelí (more on that in a later post).  I had no other reason to go, and I had done no research, leaving the plans in the hands of my friend, who had invited me to join her, and the lead organizers of the brigade.  I will admit that I had quite an easy time in arriving, relative to many of the experiences I have had in Central America.  I unexpectedly became the only one to arrive on time (due to severe weather delays on the East Coast), but I was still warmly welcomed at the airport by Stephen from the Foundation and a driver, Juan, who quickly acquired the affectionate nickname, Don Juan.  After a 2 hour drive and loads of conversation later, we arrived.  As I was the only one of the US team to have arrived, I stayed in a little house on the grounds and spent the next few days catching up on sleep, wandering the city with Stephen, and sharing meals with him and his lovely wife Luisa.  Quite a nice, cozy transition, huh?  But, I’m really not sure that I wouldn’t have felt the same about Estelí if I hadn’t of come under different circumstances.  Sure, the ease of arrival and the comfort obtained from familiarizing myself to the city under the guidance of a local, as well as knowing there were people around to draw upon when needed, allowed the extra stress of being in a new place crumble to dust.  But, the city has a vibe, an energy.  It’s not overwhelming in its size and hustle, like the bigger cities, but it’s big enough to have some spunk.  And, I like that.

Really? Is he really walking a bull onto the Pan-American Highway? Yep. Not unusual.

So many means of transportation…bikes, motorbikes, horses, cars, trucks…and these peddle carts. Whatever gets the job done.

Day 1 in Esteli. Stephen and I walked into town to explore and run some errands. I was kind of stunned as we encountered this view as we crossed the bridge. I was definitely not expecting much of this town, but I think that is when you have the best times!

Estelí, officially Villa de San Antonio de Pavia de Estelí, known as “the Diamond of the Segovias,” is the third largest city in Nicaragua (pop. approx. 120,000).  Located in the northern central highlands, along the Pan-American Highway, not too far from the Honduran border, this city is a fast growing, commercial center with a bustling university environment and one of the best soccer clubs in the country, the Real Estelí, “The Train of the North.”  Surrounded by mountains, tobacco farms, and nature reserves, the city is quite picturesque, especially at dusk, when the life of the city streets meets the mountains and sunset as the backdrop and the air is cool enough to let you forget the sweat and polvo of the mid-day. 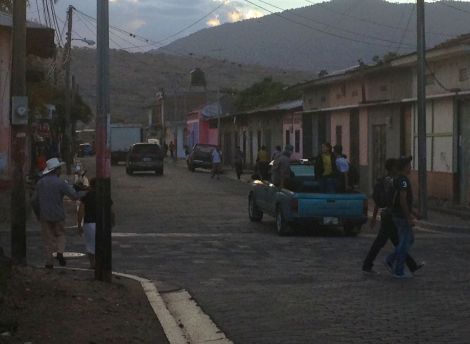 Everywhere you turn in Estelí, you see murals.  What is striking is that, while there is a huge spectrum of purpose to these murals, they all seem to be positive.  Done with purpose.  Not just graffiti, scrawl, tags.  I rarely saw “junk graffiti,” but the murals were everywhere.  (Google image search “murals of Esteli” and see for yourself.)  Blank spaces transformed into beautiful murals, the majority depicting images of community and culture.  The story behind it starts with FunARTE (http://www.funarte.org.ni/), a long standing organization which focuses on promoting human rights and child development through the development of their creative abilities.  The mural movement sprung about in the ‘80s to promote healing among children and community emerging from a 10 year war and 40 year dictatorship.  From this, several hundreds of murals have been painted throughout the city over the years, adding beauty to otherwise quite plain walls.

Love the sense of humor! 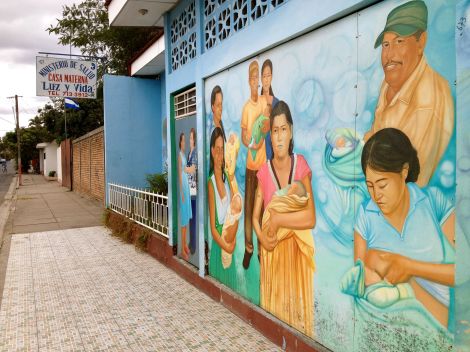 Many of these murals illustrate various aspects of community. This one was outside a women’s health building, which actually provided prenatal and postnatal care to woman, including housing for the last 2 weeks of pregnancy and the first 2 weeks post-delivery for those living in rural areas. Many are doing wonderful things here in Esteli. 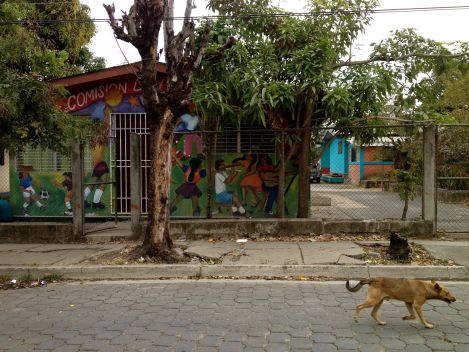 The face of the future! 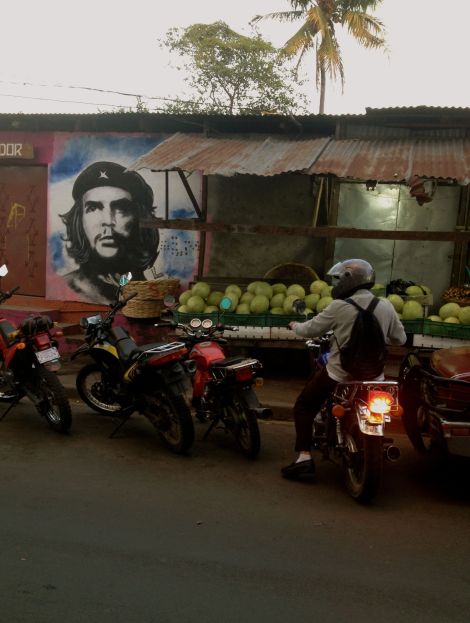 …and faces of the past. Murals definitely got a bit political around here.

The pleasant climate of Estelí lends itself to tobacco farming.  But, Estelí’s tobacco story is more interesting than just that.  Estelí is an extremely important cigar-producing city, producing cigars of quality rivaling that of Cuba.  Why?  The 1959 Cuban revolution led capitalist Cuban cigar makers to flee the country with packets of their precious tobacco seeds.  Not long later, they discovered northern Nicaragua’s fertile dirt perfect for growing tobacco.  And, so they relocated their dynasties to Esteli and began producing their cigars once again.  Tobacco fields stretch out amongst the Estelí valley dotted with giant drying barns.  The cigar production factories can be found throughout Esteli, only a few which will let tourists through their doors.  (The tourist office can help you if you have no other source of good information).  But, finding a good cigar in this town is another story.  Logically, the best cigars are reserved for export.  But, more importantly, many of these businesses operate under a free-trade agreement that prohibits them from selling their products within the country.  Even when you are able to find a factory that will let you in for a tour, they are not allowed to sell you cigars.  More likely, they will give you one free of charge, as a sort of taste taste.  If you want to buy a good cigar, you have to search out a nice hotel that sells them and fork out mucho dinero to cover inflated prices.  More reasonably, if you want to buy a good Nicaraguan cigar, look for them in your cigar shop at home…will likely be much easier.

I have to admit that I did not spend any time sight seeing in Estelí.  I did not leave any time to do much other than eat, sleep and work, and I never made it to a cigar factory.  It’s on my list for next year’s trip.  But, I made enough of an effort this time to know it’s not quite as easy as one would expect! 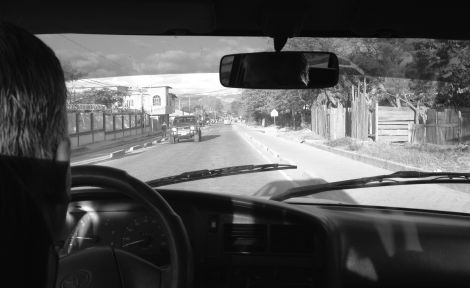 Much of the time I spent looking at the back of Juan or Dagoberto’s head, as we drove out to surrounding communities daily. Not a bad view!

Where did I sleep and eat?

We stayed at Hostal Tomabu.  A simple but clean place with rooms surrounding a cute little enclosed courtyard.  The hosts were welcoming and accommodating, always helpful.  The location was great, very close to the center of town, within walking distance of wherever you’d want to go.  The price is right, but the water ain’t so warm and the wifi is spotty.  Something’s gotta give somewhere.  But, I would stay there again any day. 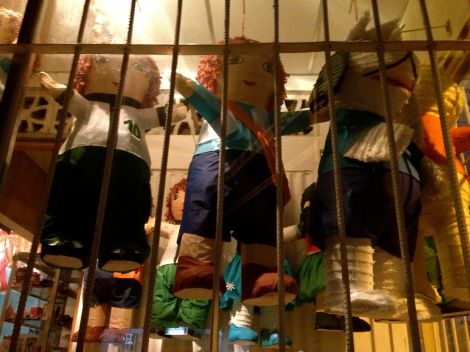 Piñata shop across the street from our hostel. Totally wanted to buy one!

The food in Estelí is mostly that of a hearty mountain diet, meat, cheese, beans and rice.  But you can find some good eats in these parts.  For just typical fare, I found Restaurante Ixcotelli to have a decent atmosphere centered around a courtyard, good prices, cold beer and quite tasty food.  I ordered the chorizo with gallopinto (rice and beans) and plantains…two nights in a row.  So, I can’t vouge for much else, although others seemed to like their food as well.

My first Toña, the kind of beer only enjoyed while in Central America¡

Chorizo, gallopinto, and plantains…it looked a bit prettier before I mixed it up and dove it. Didn’t expect it to be so delicious.

Casa Vecchia is a deee-licious Italian restaurant very much worth a visit.  The prices seem high compared to options for typical fare in the neighborhood, but they are really quite reasonable and the food is delicious.  Quite a treat after a week of chicken, rice and beans.  Four of us treated ourselves on Valentines Day, and I think we paid US$40 for 4 large entrees and 4 glasses of vino.

Two words…damn delicious. That’s all I have to say.

There are a few good Cuban joints around town.  El Cubanito, Stephen’s favorite, was closed as the owners were visiting family in Cuba.  But, we did eat at Rincon Pinareno, which has open air seating on the second floor and very tasty cuban sandwiches.

Stephen and Luisa, our 2 lovely hosts, at dinner the last night of our trip. I was very tempted to post the previous 4 photos, where Stephen was mocking me and my delight at every word of Spanish laced with Irish accent that comes out of his mouth…but I respect him to much. I’ll keep them for blackmail!!! 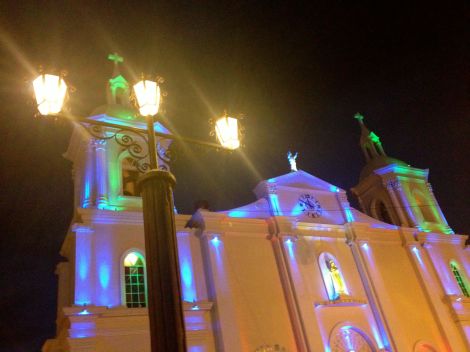 The cathedral lit up for Ash Wednesday.

One response to “Estelí, the city of murals…cigars and soccer.”